His Mercies are New Every Morning 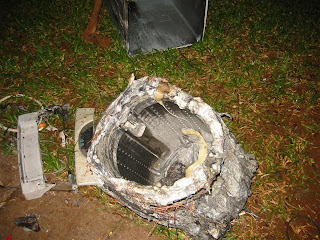 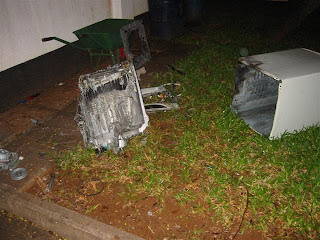 Last night at 12:30 am, our next set of guests arrived at our house straight from the airport. Bethany is a former HOPAC teacher and our friend, and she has returned for two weeks with her husband Matt and a team of future teachers from her college. We are excited to have them stay with us! However, they didn't know they were in for the night of their life....

Everyone finally got to sleep between 1:00 and 2:00 am. The power went off at 2:00 am. Matthew (age 11, not to be confused with Bethany's husband Matt), who has been staying with us for two weeks, woke up. I had discovered from previous power outages that he does not like the dark, and cannot sleep when the power goes off. So, after a few moments, I was not surprised to hear him call out to me, "Please, Mrs. Medina. I really, really need a light."

So I got up. I went to the kitchen and lit two candles. I had done this before for him last week--the only difference was that last time I had put the candles in porcelain bowls, and this time I put them in plastic bowls. Why didn't I just give him a flashlight, you may ask? Good question. I have no idea. It was 2 am, I had just gone to sleep, and maybe I had some insanely stupid reason like I didn't want the batteries to run out on the flashlight.

So I took the candles into Matthew--putting one on the desk, and one directly across the hall in the bathroom on top of the washing machine. The candles were only about 3 inches tall and of poor quality. I figured they would burn for about 20 minutes and then burn themselves out. That's what happens every time I light candles, which is quite often.

The power came back on about 10 minutes later. Matthew told me later that he got up and blew out the candle in his room. I was still awake, and thought about getting up to blow out the candle in the bathroom. But I thought to myself, "Don't be paranoid; you know it will just burn itself out." (I definitely have a tendency to be paranoid about these kind of things.) So I consciously made myself stay in bed and go to sleep.

At 4:00 am, the power went out again. After a few minutes I heard Matthew calling me again. I called back, "Just wait and see, Matthew--maybe it will come back on." But his calling became much more insistent.

I got up, opened the door, and the hallway was filled with smoke. The washing machine was engulfed in flames! My washing machine is European and mostly plastic. So, of course, at that point, I start yelling bloody murder for Gil, who runs out, as well as Matt and Bethany. Everyone started yelling for buckets, tripping over each other, and general mayhem insued.

Five minutes later, the fire was out, all our faces were covered in soot, and a thick layer of smoke rose to the ceiling of every room in the house. We turned on every fan in the house (thankfully we have many) and aimed the fans toward the windows (thankfully, we also have many of those).

Within a half hour, enough of the smoke was out of house that we could go back in, though we still couldn't breathe in the hallway and bathroom. Now that it's morning and the smoke has cleared (literally!) and I have been able to take stock of the damage, it's really not so bad. I thought I would need to wash every item of fabric in the house, but that only goes for Matthew's room and some other things in the direct line of soot. I think (hopefully) only the bathroom will need to be repainted, but we'll see how much we can scrub off the other walls.

Guess I should have been more paranoid. Of course, at this point, it's easy to say, "What the heck was I thinking putting a candle in a plastic bowl?" But I had done it before, and the candles had just burned out. Still...what was I thinking? I have no idea.

There is no fire department in Tanzania.

Yet this I call to mind
and therefore I have hope:
Because of the LORD's great love we are not consumed,
for his compassions never fail.
They are new every morning;
great is your faithfulness.
Posted by Amy Medina at 9:18 AM 5 comments:

1. Gil's baseball caps
2. Bread left out for more than one day
3. A wet spot on my couch
4. My Bible cover
5. Our toothbrushes
6. My can opener
7. Leather watch bands
8. Any clothing that doesn't dry completely (a definite challenge in the rainy season!)
Posted by Amy Medina at 5:22 PM No comments: