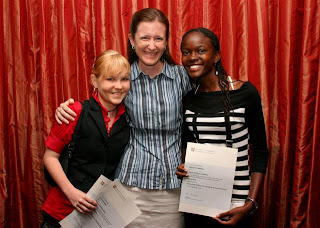 HOPAC students work really hard. HOPAC uses the Cambridge International Curriculum (IGCSE, or rather O-levels and A-levels). A-level classes (11th and 12th grades) are definitely at least equivalent to AP classes in the States, if not higher. I spoke to one teacher the other day who felt that the content of her A-level psychology class was actually post-college graduate level.

Last night Gil and I went to an Awards Ceremony for two of our students. Lotta received the highest marks on both her Business Studies and Biology exams of any student in all of Tanzania. Dorothy did the same on her Geography exam. Gathered at this ceremony were students and families from schools all over Tanzania. It was held at the fanciest hotel in town (where President Bush himself stayed in February) and the British High Commissioner (who kept being referred to as "Your Excellency") did the ceremony.

We were proud! I was Lotta and Dorothy's teacher for 5th and 6th grades. This is now Gil's fourth year as their Bible teacher. Both of them are a huge part of our lives and our kids' lives. We love both of them as daughters...who are now old enough to be our friends.

They are now both seniors and we are having lots of conversations about college. I think I understand what it must be like for parents to have to send their 18-year-olds away! How I pray for God's grace and mercy to follow them wherever they go.
Posted by Amy Medina at 1:09 PM 2 comments:

On a Lighter Subject....

...a recent trip to the pool. There's a string of beach hotels about a mile from our house, so we like to frequent one of the pools there. This was Josiah's first time in a pool. 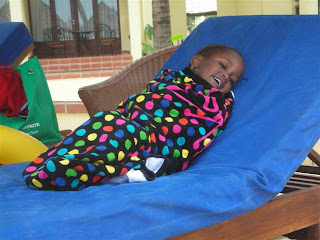 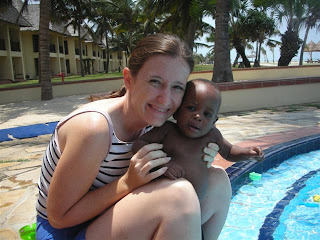 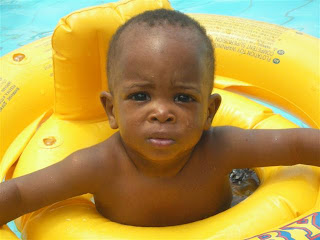 Not quite sure of what he thinks of all this....

It has been such a joy to be Josiah's mom this past month! We had visited him three times in the orphanage before we brought him home, and all three times, he cried incessently! The first couple weeks he was home with us, he was clingy and fearful. He had to be within two steps of an adult or he would scream. He didn't sleep well and he wouldn't eat anything except formula and basic wheat cereal. And whatever he did eat went straight through his system (and the doctor insisted he didn't have any parasites).
Poor little guy.

Today marks the one month anniversary of bringing Josiah home...and he is a changed baby! He is curious and happy and gets into everything. He is attracted to balls like a magnet, especially ping-pong sized balls, because he can clutch them in his little hand and carry them around (which he usually does most of the day). He loves making noise and banging things. He gives us great belly laughs. He is eating voraciously--everything I give him, and his digestive system has leveled out. And...he is sleeping over 16 hours a day! No joke. It's like he is making up for lost time. I'll take him to the doctor again in about a week, and I can't wait to see how much he has grown!

The Least of These 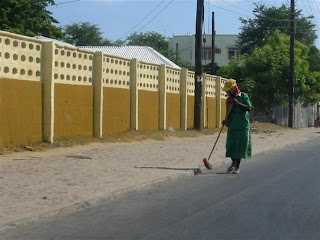 She is given a broom and a bucket.
Every day, she does the same thing: Sweep the dirt off of the busy streets.
With a scarf over her face to keep out the dust, and dodging traffic, she sweeps under the sweltering tropical sun.
All day. Every day.
It's a government job, and I can't imagine it pays more than $2 a day.
Yet she is a lucky one, because she has a job and gets to bring money home to her family.

There are dozens like her throughout the city. Every day we see them sweeping.

And I wonder: What does it feel like to be a street sweeper? And why not me?
Posted by Amy Medina at 7:07 AM 4 comments:

Living With (But Not In) Poverty 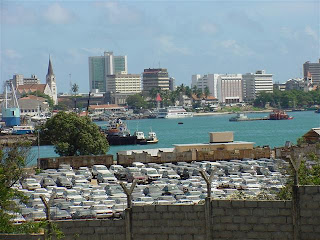 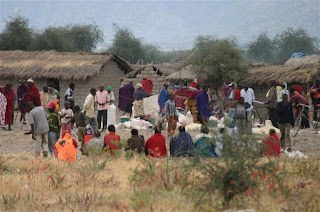 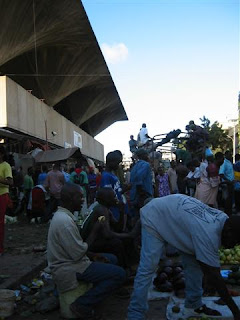 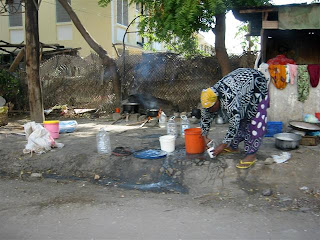 Email ThisBlogThis!Share to TwitterShare to FacebookShare to Pinterest
Labels: Lessons and Musings, Life in Tanzania, Living With (But Not In) Poverty

On Having Two Children

"Grace, you're not the mommy."

"Please don't yank Josiah by the arm when you want him to come with you."

"Please don't pick him up by the neck, either."

"Please don't make him laugh while he is eating."

Grace is learning the meaning of the word "brother." Last week, a young couple was at our house. Grace asked the guy, "What's your name?" He told her. Then she asked him, "What's your brother's name?" pointing at his wife.

Two Weeks as a Family of Four

So yesterday we learned Rule #47 in raising children: Getting two children to cooperate in a photo shoot is 10 times harder than one child. But anyway, here we go.... 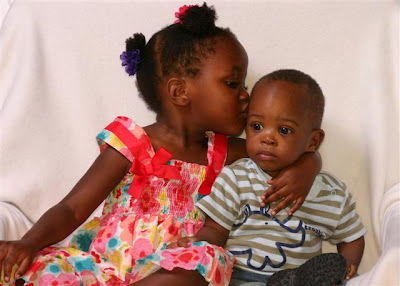 Grace is a great big sister. When Josiah cries, she says, "Don't cry, Sweetie. I'm right here!" And then she says, "I'll get you a spoon!" For some reason, she's convinced that will make him stop crying. And sometimes it actually works. 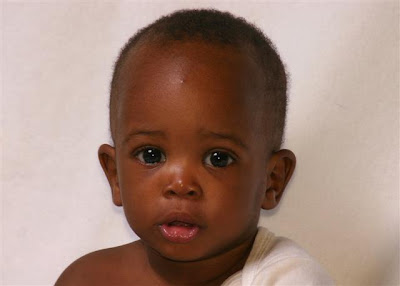 The doctor confirmed he is indeed little. Below the 5th percentile actually. But we are fattening him up! 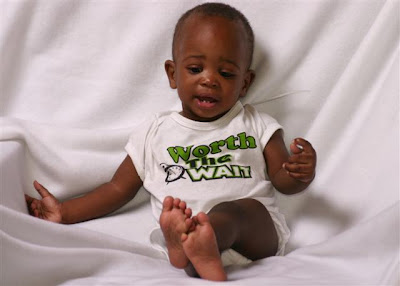 The shirt says it all! (Thanks, Mom!) 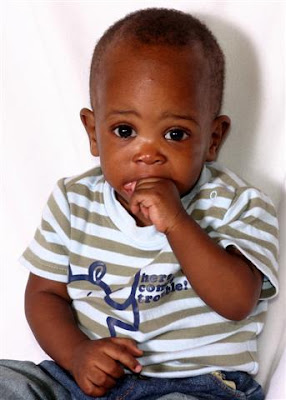 Making a variety of noises with finger and mouth is one of his favorite things to do...this must be a boy thing? Preparing for all those car and truck and helicopter noises. 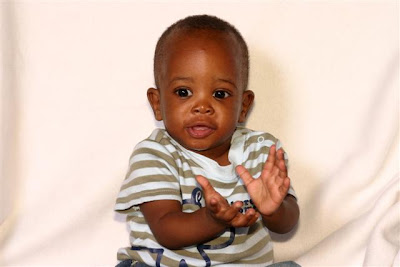 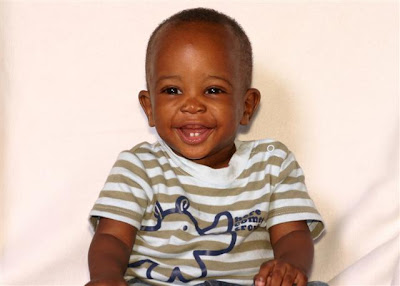 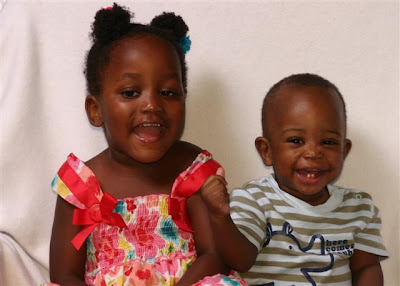 The other day I had strapped Josiah in the high chair at lunch time, then ran into the back of the house for a moment. When I came back, Grace was feeding Josiah unbaked cookie dough with a spoon. Ummm...Mommy's little helper?! 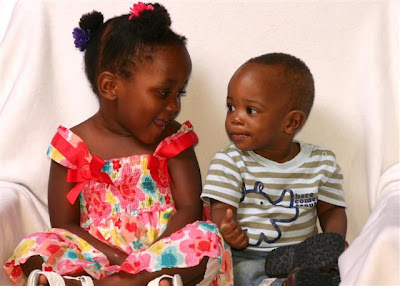 "This is my brother Messiah!" she proudly tells everyone. The other day I was letting her watch part of the Jesus film for children. "Mommy, they are talking about Messiah!" she told me excitedly while pointing to her brother.
Posted by Amy Medina at 2:24 PM 7 comments: