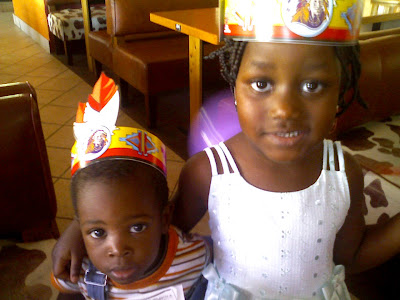 Grace asked us recently, "Can we go to the Indian restaurant?"

I couldn't figure out what she was talking about. "Anghiti's? Copper Pot? Copper Chimney?" There are numerous (scruptious) Indian restaurants in Dar, but I never thought Grace would actually choose to go there.

And then I made the connection: Oh, the Indian restaurant: Spur.

Spur is probably the closest we get here to Applebees or Fridays or Chilis. Fully air conditioned. Slick photo menus. Padded booths. Salad bar. Even a kids' section in the back with a slide and face painting.

And the food? Well, let me put it this way. If you've been in Dar for at least 6 months, the food is fabulous. If you go there only a few weeks after arriving from the States, well....not so much. As long as you stick to the burgers or steaks, you do okay. I remember, years ago, when I first went there (shortly after coming from the States) excitedly ordering "nachos" from the menu. Uh, yeah...that was the last time I ever did that. Imagine cottage cheese instead of cheddar cheese and spaghetti sauce instead of salsa...you get the idea.

Anyway. The most amusing part about Spur? The theme. Just as Grace said, the theme is indeed "Indian." As in "American Indian," "Native American," or "First American"--whatever the new politically correct word is.

Email ThisBlogThis!Share to TwitterShare to FacebookShare to Pinterest
Labels: Growing up in Africa, Life in Tanzania

I experienced Spurs after 8 months in Tanzania -- and can agree at that point -- it was like a trip to heaven :)

hehehehe Sounds great. The look on Grace's face says it all! And I think the latest term is First Nation. ;)

My kids STILL have their Spur club cards in their wallets!! By the look on Grace's face, she'll keep her card a long time, too!