I recently saw this t-shirt: 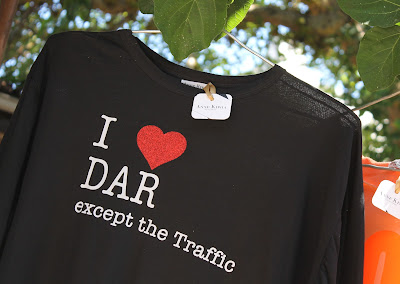 Oh yes.  That is my life as a resident of Dar, but even more so as an adoptive mama.

A bit of relief has been felt in this household in the past few weeks, as we have acquired two new passports: 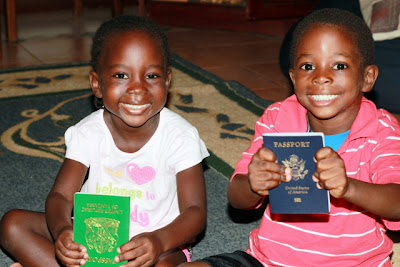 If you could only understand what goes into procuring these precious little books of paper.  Bringing home Lily's Tanzanian passport turned into a much bigger undertaking than expected, or necessary.  But such is life.

Last week I realized that in order to track down this passport, I would need to go to the immigration headquarters building in downtown Dar es Salaam.  I had only been there once, and my perception of it was that it was far, far away.  Never never land.  Like, the kind of errand that would take me the better part of an entire day to complete.  Needless to say, I was not looking forward to it.

I also did not remember how to get there.  Gil told me to look it up on Google Maps. 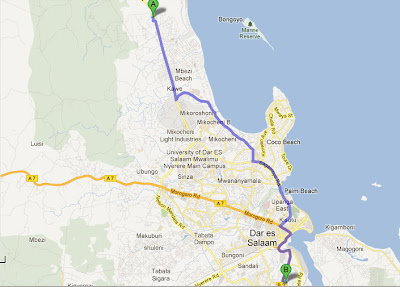 I didn't know a lot of those streets even had names.  But my main shock in seeing these directions is that it told me that it is only 25 kilometers (15 miles) from our house to Kurasini.

15 miles?  15 miles!  Like, if I was in America, I could jump on the freeway and be there in 20 minutes?  Like I said, my perception was that this place was in Never Never Land.

My second shock came from Google Map's estimation of how long it would take to get there:  34 minutes.

At this, I had myself a good long laugh.  Obviously, that little satellite up there, looking down on good ol' Dar es Salaam, has no idea that 5 million people live in this city.  5 million people on roads that could handle about 250,000, give or take a few.

So when I left for the trip, I set my clock.  90 minutes later, I arrived.  90 minutes for 15 miles.  No wonder I thought it was so far away.  And it took at least that long to get back home.

But at least, we are now a 7-passport family. Can't wait until we are an 8-passport family, when Lily has her U.S. passport.  The day that I am done acquiring passports will be a Day of Celebration.  You will be invited.  But it will take you at least two hours to get to our house from the airport.  (Google Maps:  17 miles, 46 minutes)

Email ThisBlogThis!Share to TwitterShare to FacebookShare to Pinterest
Labels: Adoption, The Interesting and the Amusing in My Daily Life