I dream of hugging my Daddy again, and chatting with my mom for an hour after breakfast.  I can't wait to experience winter and spring with my children, and to go for long quiet walks in the park.

I want to order pizza and have it delivered to my door when I don't feel like cooking.  I want a break from ticks and cockroaches and mosquitoes.  I want to be able to drive a car without that tense feeling in my stomach.

I long to sing in the churches that are full of my history and to ride bikes with my children on the same street where I used to ride bikes.  I want kitchen drawers that don't have to be yanked open so hard that I fall backwards and I want to celebrate Independence Day and Thanksgiving and Memorial Day in the right country.

I don't know how I will live a year without my soul sisters, who are knit together in my heart and have held me up through the sweat and the dust.  Here, I am understood.  I am losing all of my work, all of my jobs and tasks and my identity, and even my roles of wife and mom are going to change completely as I take on new work, new routines.

And I don't know who I will be, because Africa and HOPAC have been my life for 10 years.

The emotions of excitement and anticipation and loss and stress and grief and transition and change all clash together in my heart.

Too much feeling; just too much.
My brain is tired, and often I just go numb.

But I know it has an end, and I know from experience that when I get on the plane, everything is okay.  Because I have been at this place before, and that makes it easier.

And He is there, and I am His.
He will never leave me, even to the ends of the earth.

Young people write to us sometimes and ask, How do you know if you are called to missions?

Marvin Olasky, editor of WORLD Magazine (our favorite) wrote this in the May 4 edition (they arrive late here) on the topic of whether or not to consider a radical move:

Much depends on motive.  Here are three clarifying questions:
First, where can I be most useful to the cause of Christ?
Second, where will I be most challenged to live and think as becomes a follower of Christ?
Third, what will I love doing?

Then he adds, Once we know ourselves, chapter 3 of Proverbs tells us what to do.  'Trust in the Lord with all your heart....He will make straight your path.'

Brilliant.  That's it, right there.

Know your God.  Know how He made you.  And ask those three questions.

I do realize that sometimes we are not given the luxury of choosing; sometimes our circumstances make the choice for us.  And in those cases, bloom where you are planted.  That's God's will too.

But, as Olasky says so well,

Why not go for the challenge rather than play out the string?

Posted by Amy Medina at 8:39 PM No comments:

Email ThisBlogThis!Share to TwitterShare to FacebookShare to Pinterest
Labels: Lessons and Musings

It was May of 1989.  I was 12 years old, and my family was getting ready to leave the country where I had spent most of my childhood.

We were leaving Liberia to go back to California for a year-long home assignment.  We packed up our house and put all our personal belongings into the spare room.  Another family would stay there for the year we were gone.

The plan was that we would return in the summer of 1990, and would live in Liberia for my four years of high school.

But during that year we were gone, a civil war broke out in Liberia.  It got worse.  And worse.

We lost everything.  Everything we owned was in Liberia, and it was all looted.  I lost my sixth grade journal, the painting my grandmother made me, and my childhood treasures.  More significantly, I lost my home country, my identity, my innocence.

I never got to say good-bye, either to the country or the people I loved.  Liberia haunts my dreams; it remains an unfinished part of my life to this day.

Now, it's May of 2013.  I am all grown up now, and our family is getting ready to leave the country where we've spent 10 years.  We are leaving Tanzania to go back to California for a year-long home assignment.  I am packing up our house and putting all our personal belongings into a spare room.  Another family will stay in this house for the year we are gone.

And I must admit; I am anxious.  The feelings are too eerily familiar to what I experienced as a child--packing up, leaving everything behind, assuming I will return.  So I find myself worrying that the same thing is going to happen again this time....that I will lose everything.

It's a mostly irrational fear.  Tanzania is a far more stable country than Liberia was in 1989.  But the truth is, you never really know what's going to happen in Africa.

If there is one thing this life has taught me, it's that I must hold loosely to everything.  Everything.  I can't put down roots anywhere; I will never find stability.   I will never grow old in one house.  I may someday have to evacuate with the clothes on my back.  Or, I may just get robbed blind.

But it's okay.  Because it reminds me that I shouldn't love this life too tightly anyway.  This life is not all there is, and it's definitely not worth fretting over.

Aim at heaven and you will get earth thrown in.  Aim at earth and you get neither.  C. S. Lewis
Posted by Amy Medina at 6:23 PM 11 comments:

The Calm Before the Storm

We spent last weekend with good friends at one of our favorite places on earth, Chaza Mwamba (literally Barnacle Rock).

It is probably the most beautiful, heavenly, peaceful place I ever visit.  The beach house is incredible, but the beach itself is....indescribable.

And just in case you're wondering, this beach is deserted.  No one there but us.  And yes, even missionaries can afford it.   Better than Malibu for non-Malibu prices.  HOPAC still needs teachers for next year....want to join in? 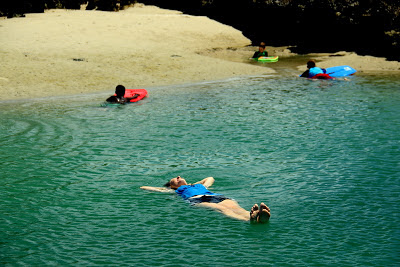 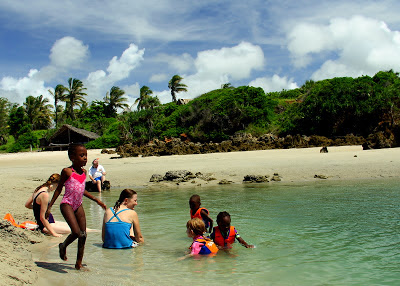 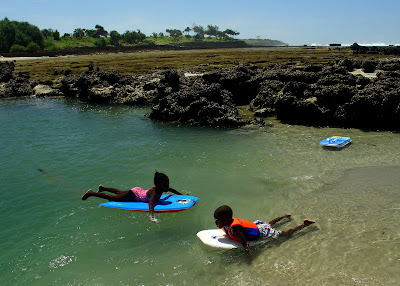 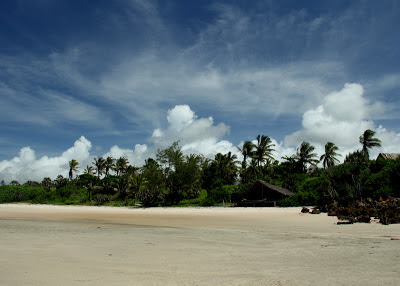 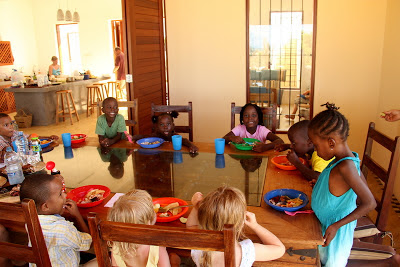 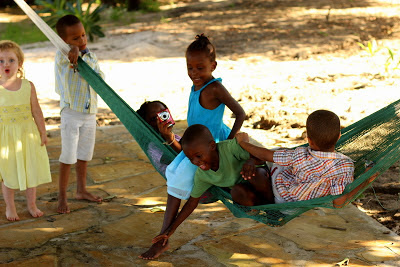 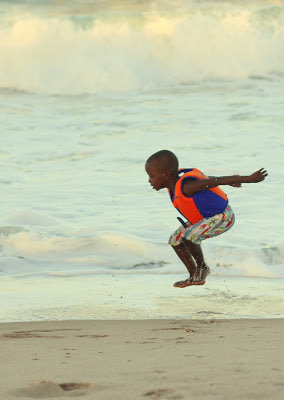 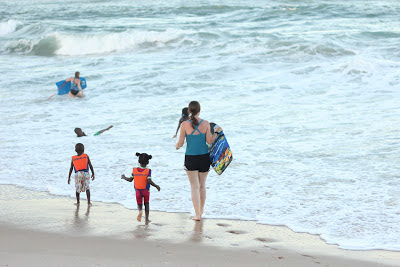 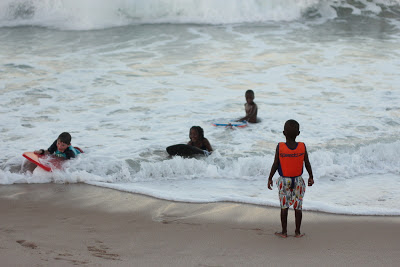 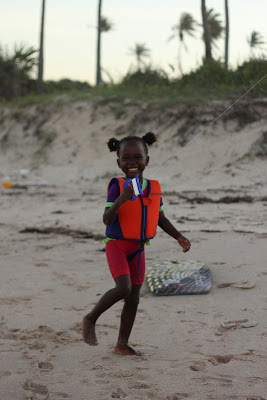 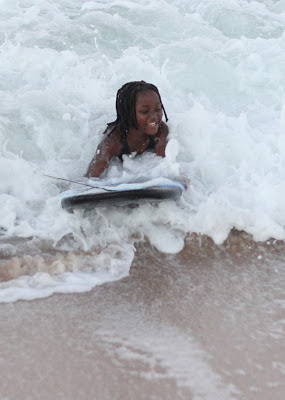 It was perfection.  And just what we needed in the midst of the craziness of our lives, and the coming bigger craziness.

Six weeks to go from today.  From here on out, it's one big roller coaster.  All we can do now is hang on for dear life until we get on that plane.

Email ThisBlogThis!Share to TwitterShare to FacebookShare to Pinterest
Labels: Vacationing

As student council adviser, preparations for the annual Talent Show have been occupying a great deal of my time and mental energy these last couple of weeks.

And last week, all I could think was, I am so glad that I don't have to do this next year.

But then Friday night came.  And it was full of laughter and community and great memories.  Now, I am wistful.  It's always worth it.  And I will miss it.

Oh yes, we did zip line our Student Council president into the show!  (Of course, that was Gil's idea.  Of course.) 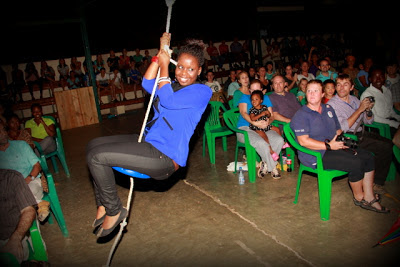 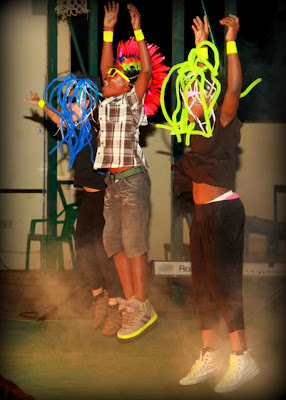 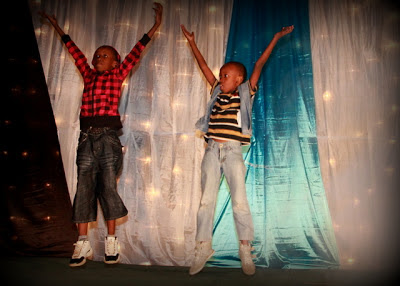 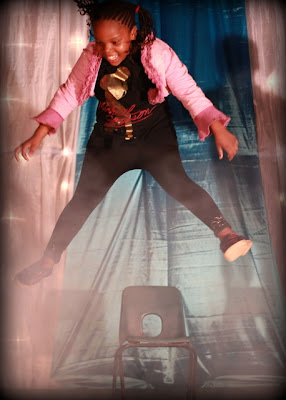 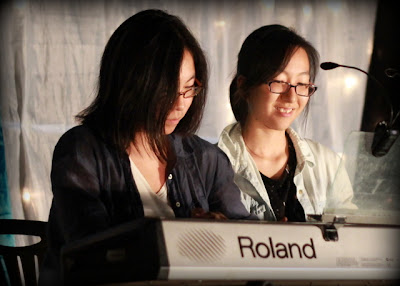 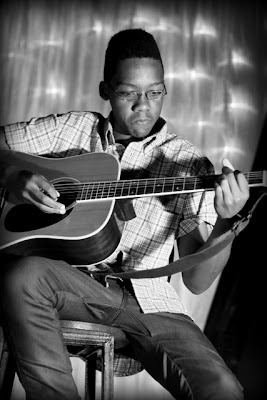 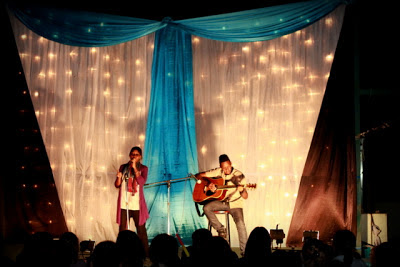 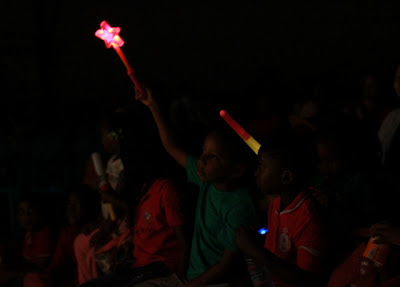 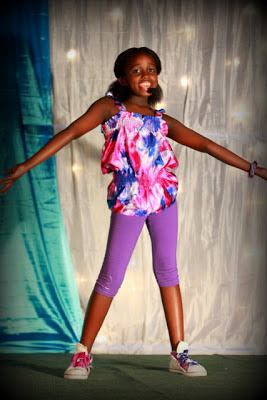 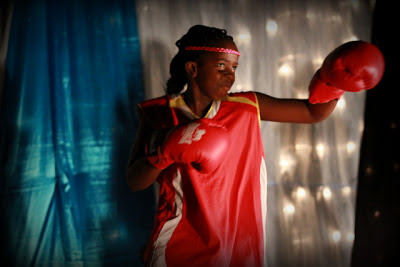 The last act was five little girls dancing to Eye of the Tiger.  In rehearsal, I kept telling them, Look mean, girls!  Look mean!  They ended with a bang.