Our Struggle Is Not Against Flesh and Blood: The Plight of Tanzania's Albinos 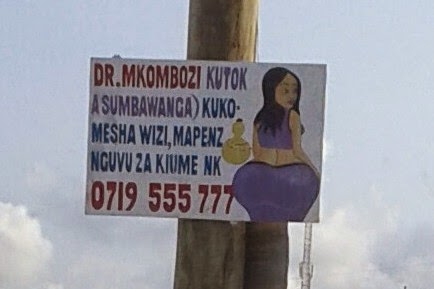 In Tanzania, albinos are regularly kidnapped, murdered, and their body parts used in witchcraft rituals.

It sounds like the plot to a horror movie.  But it's real.

Albinism is rare worldwide, occurring about 1 in 20,000.  However, in Tanzania, for some unknown reason, it occurs much more often--1 in 1400 or maybe even more.  And as you can imagine, in Africa, a person who lacks any skin or hair pigmentation sticks out a whole lot more than in light-skinned countries.

Sticking out is only one of their hardships.  They also struggle with eye problems and a prevalence of skin cancer.  But most horrifying of all, somewhere along the way, some people got an idea from the pit of hell that albino body parts can make you rich or successful or irresistible.

And the West gasps in horror and comes in with its answers.
Education!
Awareness!
We need to tell those poor ignorant Africans that albinos are people too!

Except then you find out that albino body parts sell for hundreds of dollars, and corpses are worth tens of thousands of dollars.

Consider that the average income of Tanzanians is less than $1000 a year.  Consider that traditionally, albino murders go up during election years.  So who's paying for these atrocities?  Kind of flies in the face of the "poor ignorant African who just needs to be educated" theory.

In the West, we are all about rationality and science and education, aren't we?  And we think that's the answer to cure All The Problems In the World.  People just need to listen to logic, right?

Maybe instead what we need to do is educate ourselves about worldview in the majority world.  It's true that many Africans aren't educated.  But the reality is, many of them are, and they really don't care about the western version of rationality and science.

They know that animistic spirituality has power.  And they want it.  In America, we decorate with ghosts on Halloween and watch freaky supernatural movies and laugh because it's all just pretend.  After all, isn't that what science has taught us?  Or can we consider the possibility of what Africans have long known...that there actually is power in witchcraft?

A couple of weeks ago, a four-year-old albino girl was kidnapped from her home in the middle of the night.  Enough anger went up that the Tanzanian government decided to solve the problem by banning all witchdoctors.  A literal "witch hunt" will begin next week.

This law will probably have the success of U.S. Prohibition in the 20's.  Or of the New York City ban on soft drinks.  Has a law of a nation ever succeeded in changing the heart of man?

I once saw a video of an organization in Africa who is trying to help communities with the problem of jiggers (bugs that lay eggs in people's feet).  "People think jiggers come through witchcraft," the spokesperson said.  "But we are educating them."  Yeah.  Good luck with that.

Why do you think Ebola spread so fast?  Because west Africans believe that if they don't prepare dead bodies properly, their spirits will come back and haunt them.  You can "educate" about germs and clean hands until you are blue in the face, but it's hard to argue against ghosts.

I mean, just think about it.  If somebody came to you and earnestly said, "Your seasonal allergies are caused by evil spirits," would you give them the time of day?  Of course not.  Because in the West, we believe everything is Always About Science.  Just as we won't be convinced by their animism, they won't be convinced by our science.

Because they know better.  They are not stupid.  It's not all their imagination.

Yeah, there's germs and genetics.  But Evil is real too.  It has power.
Have we forgotten?
For our struggle is not against flesh and blood, but against the rulers, against the authorities, against the powers of this dark world and against the spiritual forces of evil in the heavenly realms.

Education isn't what is going to protect the lives of albinos.  Nor is banning witchdoctors.  Instead, Africans need to be transformed by the One who has crushed Evil's head, and allow His Reality to change their Reality.  Because that's where the real power comes from, and with it, hope, courage, and love for others, which are all things witchdoctors can never offer.

And maybe, for us Westerners on the other end of the spectrum, who are always convinced that it's just about science and education, we need to open our eyes to the Reality that there's Something More out there than our eyes can see.

Email ThisBlogThis!Share to TwitterShare to FacebookShare to Pinterest
Labels: Africa and Worldview