What Missionaries Aren't Telling You (and What They Need From You) 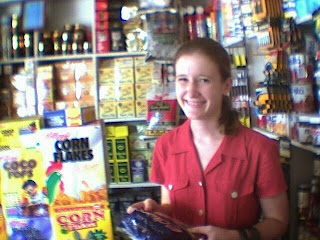 August 2001
I remember the day Gil took this picture during our first month in Tanzania.  Completely fake smile.  I was dying inside.

Fourteen years ago, what if I had been completely transparent?

Instead of, Pray for Amy because she's struggling emotionally, what if I written this in our email updates?

Amy is on the verge of a nervous breakdown.
We're traveling to Kenya during our Christmas break so that Amy can talk to a counselor.
The counselor wants Amy to take anti-anxiety medication.

Instead of, Our ministry is struggling, what if we had written,

The church we are working with is on the verge of splitting.
We were sharply criticized today.
We feel like failures.

But we could not.  We were paralyzed by fear.

Missions is brewed in a pot of extremely high expectations.  Missionaries undergo a brutal screening process by their organization.  Church missions committees pepper them with interview questions on strategy and effectiveness.  If you want to be chosen, that's what you've got to prove.

Then, once missionaries are approved, signed, sealed, commissioned, and their picture spread all over foyer walls and refrigerators across the country, they are thrust out into the world to show off their strategy and effectiveness.  After all, they've got scores of donors behind them who want to see the return on their investment.

I don't know if that's true, but that's what it feels like.

So when the strategy doesn't work (since it usually doesn't the first time around), and there is very little effectiveness to be seen, what then?  What do they tell people?  When a missionary spends three months planning an event, and only three people show up, should he be upfront about it?  When the church doesn't get planted, or when the planted church falls apart, or when the exciting new believer has been stealing from you....what then?

We wanted to be in Tanzania.  We were not going to give up that easily.  We had a good deal of grit, and a lot of God's grace, and we were in this for a long haul.  But we were terrified to be honest about how hard it was.  We were terrified of letting people down, especially our donors.

Surely that wouldn't happen, you might think.  People love you!  They will support you!  They don't care how effective you are.

Except, we knew that is not always true.  We have a missionary friend who confided in a church leader's wife about her struggles.  She assumed it was a personal conversation, but soon this heart-to-heart talk was spread across church leadership, and before they could blink, the missionaries were pulled off the field.  Unfortunately, the same scenario then happened to another friend.

We heard the stories of friends who lost support overnight because a church disagreed with an inconsequential decision.  We hear the rumblings of, Aren't national missionaries cheaper?  More effective?  More strategic?  And we interpret it as One false move and you are disposable.

So here's my advice for the Senders:

1.  I encourage churches and supporters to look at missionary partnerships like a marriage.  When you are choosing to support missionaries, just like when you are choosing who you will marry, you should be really careful.  You scrutinize.  You ask a lot of questions.  You make sure there aren't any hidden red flags.  But once you take the marriage vows, or once you sign on as a supporter, you're all in.  For better or worse.  Just as I know my husband won't leave me on a bad day, I hope that our supporters won't either.

2.  If you do need to cut a missionaries' support--for any reason--please, please communicate with them!  We totally understand when people come upon hard financial times.  But when we are suddenly dropped by a donor, with no explanation, our minds instantly go to the worst.  Did I offend them?  Am I not effective enough?  Am I a loser?

3.  If you are on the receiving end of those missionary prayer letters, I encourage you to pray between the lines.  When you see struggle, you should most likely interpret it as STRUGGLE.  Knock your missionaries off those pedestals and remember that they are flawed and sinful and sometimes just wrong.

4.  If a missionary confides in you, either in person or in writing, know that there is a great deal of trust behind their words.  Treasure that and protect it, just like you would with any other friend.  Ensure your friend that you are a safe place with no expectations and no hidden agendas.  They need this reassurance.

If it seems like I'm being too hard on the Senders, I've got things to say to the missionaries as well.   Here's Part 3.

Email ThisBlogThis!Share to TwitterShare to FacebookShare to Pinterest
Labels: Thoughts on Missions, What Missionaries Aren't Telling You