What Missionaries Aren't Telling You (Part 1) 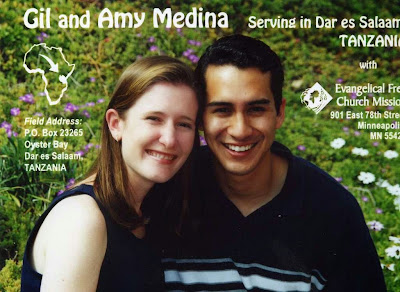 Our first two years in Tanzania were the hardest of my life.

Gil and I were 24 years old.  We had been married only 9 months.  Ten days after we arrived, I had an adverse reaction to my malaria medication that instigated over 6 months of panic attacks.  I was deep in mental darkness, and even when I began to improve, I still was barely coping a lot of the time.

My teaching job required me to wake up at 5:00 and leave the house at 6.  Usually, I didn't get home until 5 pm.   Gil's job took place in the afternoons and evenings.  When I got home from work each day, I immediately joined him in his ministry.  I loved what we were doing, but I was utterly exhausted.

Gil had joined a ministry that wasn't healthy, though we were too young and naive to see it.  We received a lot of criticism and internalized it all, believing the problems really were our fault.  Gil repeatedly asked for mentoring but didn't get it.

Then came the final blow.  There was a young man who claimed Christ, and we heavily invested in him.  He was at our house 5 days a week for almost a year.  Six weeks before we left Tanzania, we found out that he had been stealing from us.  We returned to the States in pieces.  Thankfully, God's grace put us back together again, but it was a long road.

We could hardly even talk about it with each other.  For goodness sake, we were newlyweds.  In our eyes, everyone we worked with was experienced and godly and strong and competent.  We certainly couldn't tell them we were falling apart.

You can bet your life we didn't tell our supporters.  Oh sure, there were vague prayer requests like, "Pray for Amy because she's struggling emotionally."  Whatever that means.  I look back on our prayer updates and they were full of only the good stuff.  Stories about great conversations with young people, about victories and opportunities and answered prayer.

We were not lying.  The good stuff really did happen.  We wanted to stay.  In fact, we came back.  It just wasn't the whole truth.  Everything bad, which really was overwhelming at times, got relegated to nebulous statements about "struggle."

Email ThisBlogThis!Share to TwitterShare to FacebookShare to Pinterest
Labels: Thoughts on Missions, What Missionaries Aren't Telling You