The Poverty Over the Fence

A few years ago, we took the entire HOPAC secondary school to see an exclusive premier of "The Hunger Games."  Of course, since we had to make it educational, we required them to participate in discussion groups afterwards.

Our students were shocked--shocked, I tell you--when we told them that they were the Capitol.  Of course, they wanted to identify with Katniss and District 12.  Everyone wants to be the underdog; who would ever want to be the Capitol?  Until we reminded them that they were attending one of the top five schools in Tanzania, that their families have vast wealth (even the missionary kids) in comparison to the rest of the world, and they were absolutely obsessed with entertainment.

When I read The Hunger Games series, I was simultaneously reading Martin Meredith's The Fate of Africa.  I remember being struck by the irony of the descriptions of South Africa during apartheid, and how similar it sounded to Panem.  Not only were black Africans oppressed and deprived in every way, they were forcibly confined to very specific areas and unable to travel, thus making it much harder for them to unite against the ruling minority white population.

The following pictures all came from here and can also be found here. 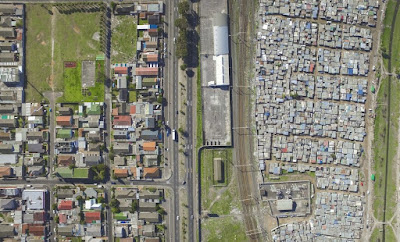 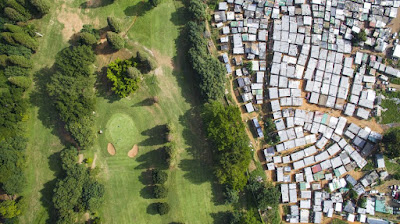 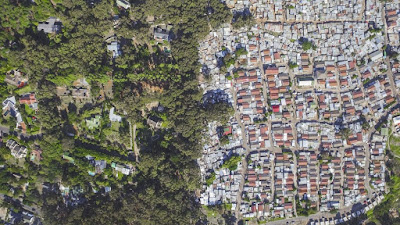 I have a number of South African friends, and one told me that while growing up during apartheid, they never even saw the shanty towns.  The white population was so carefully shielded from them that they didn't even realize they existed, making it easy to live their lives in guilt-free bliss.  Yet for some of them, all they needed to do was peek over the hedge or cross the road.  But it was easier to just not know.

Most of my readers live lifestyles like those on the left sides of these pictures.  Would anything in your perspective or way of life change if you knew that just over your back fence, there were thousands of people living in one-room shacks, with no electricity or running water?

It's easy to see these pictures and be angry at what happened in South Africa.  And indeed, everything about apartheid should be condemned.  The poverty of those on the right was and in many ways, still is, racially motivated and intentional.

But the truth is, are we really that different?  If you think you would live your life differently knowing there were oppressed, impoverished people right next door to you, then why does it matter that they are a continent away?  They still exist.  They still are there.  Even if you don't see them, they still exist.  Or is it just easier to forget about them when all you can see for miles is neatly manicured suburbs?

We may root for Katniss, but we are the Capitol.

Some of you who have been reading this blog for a while might get sick of me constantly bringing this up.  But I can't help it, because I am surrounded by poverty.  I see it, literally, everywhere I look.  Over my fence.  As I leave my driveway.  As I go almost everywhere.  Dar es Salaam is different from South Africa in that there has been very little city planning.  Nice houses are intertwined with slums, almost anywhere you look.  There is no forgetting.

I must admit that many times, I want to forget.  It's too hard.  I want to pretend it's not there; I want to live in a blissful dream-world where everyone has indoor plumbing and enough to eat.  But it hits me smack in the face every day, and I must deal with it.  I must think hard.  Pray hard.  Look for ways to understand.  Look for ways to give generously.  More importantly, look for ways to create opportunity.

I must, because I can't ignore it.  But really, none of us should.

To whom much has been given, much will be required.

Email ThisBlogThis!Share to TwitterShare to FacebookShare to Pinterest
Labels: Living With (But Not In) Poverty