Behind the Beautiful Forevers

To be virtuous is a luxury of the rich.

I just made that up.  I'm well aware that it's certainly not a true statement of everyone, as many rich people are evil and many poor people are virtuous.  But it is much, much easier for a rich person to choose to be virtuous than it is for a poor person.

And if you don't believe me, then you've probably never been poor.

To be poor in Annawadi, or in any Mumbai slum, was to be guilty of one thing or another.  Abdul sometimes bought pieces of metal that scavengers had stolen.  He ran a business, such as it was, without a license.  Simply living in Annawadi was illegal, since the airport authority wanted squatters like himself off its land.

I read Behind the Beautiful Forevers by Katherine Boo about a month ago.  I had planned to include it in my semi-annual list of books to recommend, and then I realized that I just can't stop thinking about it.  Even a month later.  This is one of those books that changes you.  You can't be the same after reading it. 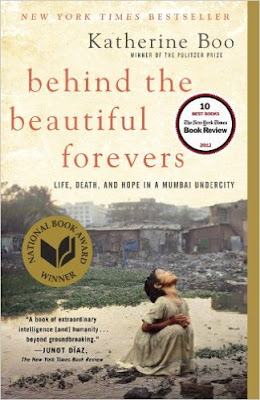 A few weeks ago, Abdul had seen a boy's hand cut clean off when he was putting plastic into one of the shredders.  The boy's eyes had filled with tears but he hadn't screamed.  Instead he'd stood there with his blood-spurting stump, his ability to earn a living ended, and started apologizing to the owner of the plant.

If you've read this blog for any length of time, you know that poverty is always on my mind.  I am surrounded by it.  I struggle daily with what to do about it.  So as I read this book, even though it is about a slum in India, I felt like it was describing the lives of those on the other side of my fence.

True, a few residents trapped rats and frogs and fried them for dinner.  A few ate the scrub grass at the sewage lake's edge.  And these individuals, miserable souls, thereby made an inestimable contribution to their neighbors.  They gave those slumdwellers who didn't fry rats and eat weeds, like Abdul, a felt sense of their upward mobility.

This book has inestimable worth in helping the average (rich) westerner to understand the vast complexity of poverty.  How it's not just a matter of providing seed money or sending a Christmas shoebox or paying for a good education that is going to get someone out of poverty.  That ethnicity and religion and politics and most importantly, worldview, have far deeper ramifications than we realize.

In this way [Sunil] learned that policemen sometimes advised the road boys about nearby warehouses and construction sites where they might steal building materials.  The cops then took a share of the proceeds.

Probably what was most valuable to me in this story was the importance of virtue in poverty alleviation.  And how the poor can't really, truly be helped until integrity is valued in a society.  And how we can't expect poor people to be virtuous until the rich are virtuous as well--starting with the government, the business owners, and the elite.

'Out of stock today' was the nurses' official explanation.  Plundered and resold out of supply cabinets was an unofficial one.  What patients needed, families had to buy on the street and bring in.

I don't think that my fellow Americans really understand the level of corruption that exists in the developing world, and how much it contributes to poverty.  I certainly didn't get it until I had lived outside of America for many years.  And I think that this is one of the main reasons why westerners' poverty-alleviating efforts often hurt more than they help.

In newspaper interviews, Gaikwad spoke of his search for unschooled children, and his hope of giving them the sort of education that would lift them out of poverty.  His less public ambition was to divert federal money to himself.

The biggest revelation of this story comes in the epilogue.  It's the sort of thing that I thought should have been included in the prologue, because finding out the truth of how this book came to be written made me want to start over from the beginning and read it again.  But since the author obviously wanted it left for the end, you'll just have to trust me when I say that this book is incredibly powerful--and it will change your life.

The crucial things were luck and the ability to sustain two convictions: that what you were doing wasn't all that wrong, in the scheme of things, and that you weren't all that likely to get caught.
'Of course it's corrupt,' Asha told the new secretary of the nonprofit.  'But is it my corruption?  How can anyone say I am doing the wrong...when the big people say that it's right?'

The subtitle of this book is Life, Death, and Hope in a Mumbai Undercity.  To be honest, I didn't see much hope in this book.  It is deeply disturbing and terribly depressing and really not redemptive.  But it's necessary, because poverty is real.  Far more real and far more prevalent than those of us with manicured lawns want to admit. And if we want to be a generation of rich people who really do help the poor, then that must start by really understanding poverty.

Among the poor, there was no doubt that instability fostered ingenuity, but over time the lack of a link between effort and result could become debilitating.  'We try so many things,' as one Annawadi girl put it, 'but the world doesn't move in our favor.'

Though the gospel was nowhere to be found in this story, I kept thinking about the difference it could make.  In promoting the value of human life.  In valuing justice and truth.  In offering forgiveness.  In providing hope.  And it reinforced to me the necessity of the gospel not just taking root in individual's lives, but the importance of it transforming whole societies by becoming a worldview of influence.

'Always I was thinking how to try to make my life nicer, more okay, and nothing got better,' Sunil said.  'So now I'm going to try to do it the other way.  No thinking how to make anything better, just stopping my mind, then who knows?  Maybe then something good could happen.'

Those of us whose lives are nicer, are better, we don't often realize how powerful we really are.  Or how responsible.

Email ThisBlogThis!Share to TwitterShare to FacebookShare to Pinterest
Labels: Book Recommendations, Living With (But Not In) Poverty