Invasion of the Millipedes

We're having a millipede invasion.  Sometime during our four months in the States, they must have figured that no one else was living in our house, so they might as well move in.

Now it's a battle to the death for territory: Them or Us.

This is a public warning to the millipedes:  This is not the first invasion we've conquered. 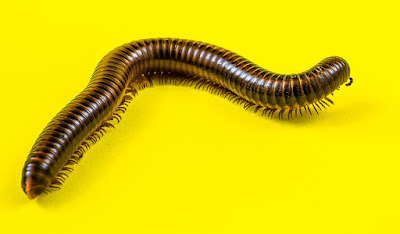 There was the invasion of the cockroaches, which resided in my kitchen for years (yes, years).  They travel in on bananas.  I had to shake them out of the toaster and regularly re-wash my dishes in my cupboards.  I got really good at smashing cockroaches with my bare hands.  Finally Amazon.com found us a poison that worked and they are gone for good.

There were also the centipedes, which are nasty, nasty creatures with a nasty, nasty sting.  I found one once in Josiah's bed when I was changing the sheets [shiver].  And two guests have been stung by them in bed in our house [we know how to treat our guests well].  But luckily my friend Permethrin, when sprayed on the baseboards, kills the centipedes on contact.  So we still see them, but they are always very satisfyingly dead.

Then there was the invasion of the ticks which also lasted for years (yes, years).  We tried everything to get rid of them:  Frontline, Advantix, drops, powders, and some sort of very scary pesticide that temporarily killed the ticks but also made the dogs throw up.

Our poor dogs were relegated to staying outside all of the time.  I let our Jack Russell in the house only at night, and only in the laundry room, and still had to pick off at least 25 ticks from her small body every. single. night.

Yet still we found ticks everywhere in the house, including in my children's beds.  I cursed the ticks.  I threatened to get rid of the dogs.  I despaired of life itself.  And then a year ago, a friend of a friend (who is a vet) sent us magical doggie pills that killed all the ticks in 24 hours and they've never come back since.  That vet saved my sanity and if I had another child or another dog, I would name it after him.

(Well, then of course, there's the ants.  I'll call that one a draw.  I kill them when they are in my way, but mostly, we peacefully co-exist.)

So now we have a millipede invasion.

They turn up in odd places like on a wooden spoon in the kitchen and curled up under the towels.  They get squashed in the door jams and hang onto our mosquito nets. Gil and I have found them on several occasions in our bed.  Johnny woke up Josiah the other night because one was crawling on his hand.  Last week, Lily tried to knock one off her mosquito net and instead knocked the net into the overhead fan, tearing a large hole in the net and making a dreadful noise.  Lily is now totally freaked out and insists I check her bed before she goes to sleep (ironically, she wasn't even this freaked out when she found a snake in her bed).

They seem impervious to permethrin.  We plug the bathtub when we're not using it and Gil has taped up the floor-drains, but still they are coming in from somewhere.  They are not dangerous, thankfully, just gross.  I can't bring myself to smash them so I just flush them, alive, down the toilet.  Our kids earn allowance money for each one they flush.

We haven't a clue as to how to get rid of them.

Oh, we will.  Like I said, this ain't our first battle. 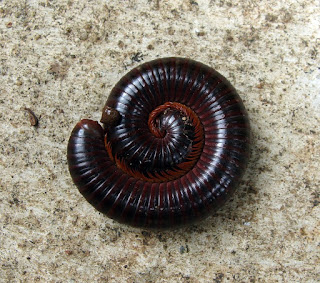 Posted by Amy Medina at 7:40 PM No comments:

Email ThisBlogThis!Share to TwitterShare to FacebookShare to Pinterest
Labels: Life in Tanzania, The Interesting and the Amusing in My Daily Life

Johnny Is Six and Josiah Is Ten

When Grace turned six, her Daddy transformed the living room into a castle.  I spent hours making little tea sandwiches out of cookie cutters.

Then comes the fourth child in the family.  Gil's and my conversation went like this:

Me, on the Tuesday before:  I guess we better celebrate Johnny's birthday on Saturday.

Me:  But if we do it this Saturday, we will have no time to plan it until Saturday morning.

Gil:  Well, then I guess we better do it on Saturday afternoon.

That's what happens when you are the fourth child.

So the party got thrown together three hours before the actual event, but that was okay because Grace planned all the games and Josiah and Lily helped with the decorations while I made the cake.

And the little boys thought it was the greatest thing ever.

Plus, I remember that the girls at Grace's six-year-old party showed absolutely no appreciation for my flower-shaped sandwiches.  I've learned my lesson since then.  Really, all you need are water balloons. 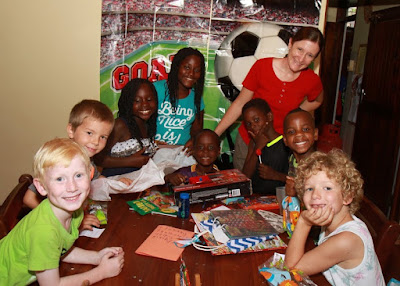 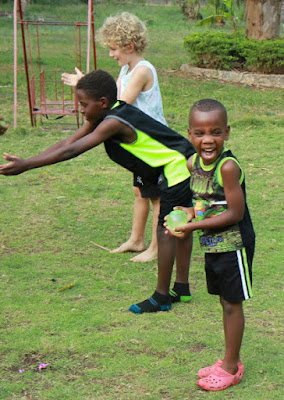 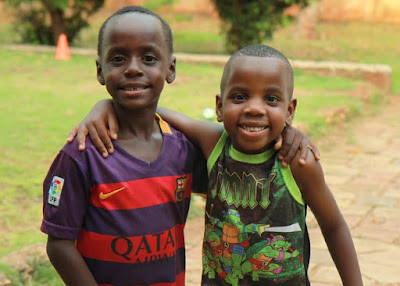 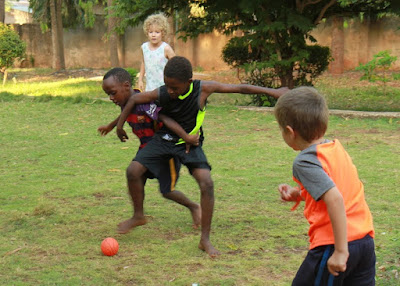 Then, less than two weeks later came Josiah's birthday.  His wasn't quite so thrown together, although he is easy to please.  Gil set up a nerf gun arena in our training center classroom, and he and his friends spent all morning shooting each other.  A ten-year-old's dream.

Oh, and I made Josiah's cake the same time I made Johnny's, so all I had to do was pull it out of the freezer.  Fry up some hotdogs and we're done.  Bam. 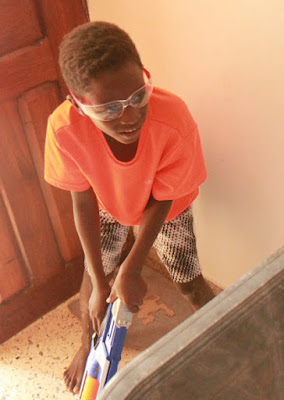 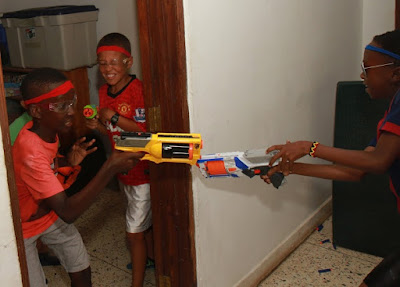 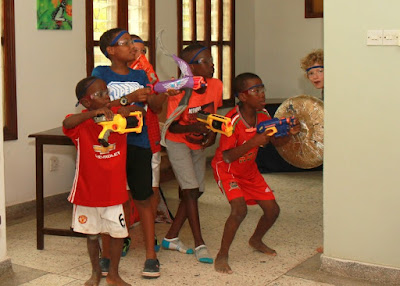 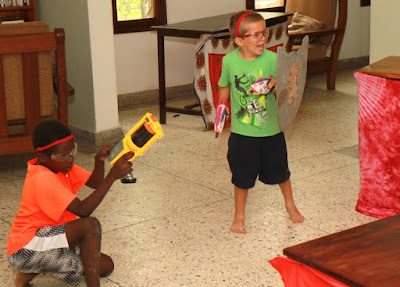 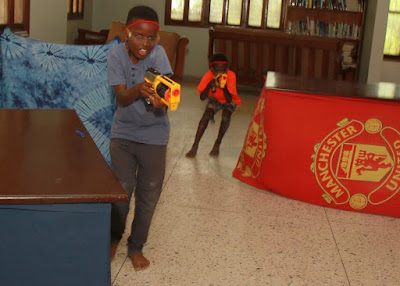 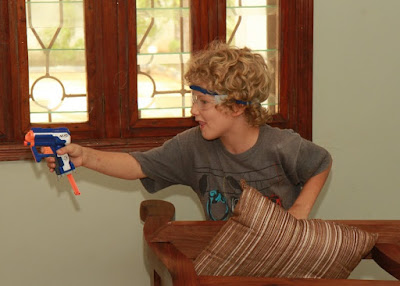 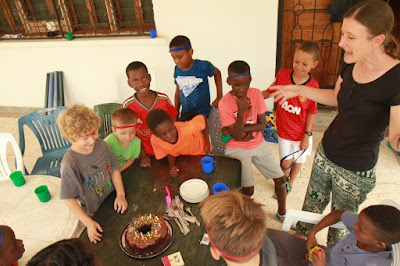 On Being a Working Mom 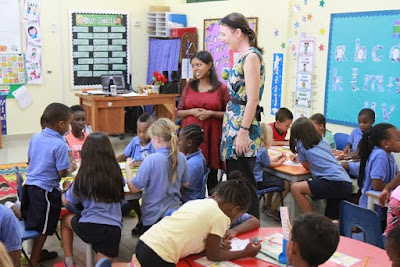 This is all new to me.  I know billions of women do it every day, but the last time I worked full-time was over ten years ago, before I had kids.

As any mom knows, raising children is work.  So I'm not implying that I spent the last ten years doing my nails and watching TV (unless you count Dora).  And along with the kids, there was a lot of ministry in there too.  But I figured I would eventually be able to work away from home when my youngest was in kindergarten.  I thought I would ease into it.  Over a year ago, I told the HOPAC director that I wanted to come back on staff this year, but only part-time.

Ha.  Elementary school principal is not a part-time job.  I knew that, of course, but so much for easing my way back into the work force.  More like being hit with a Mack Truck.  And that Mom job I was already doing?  Didn't go away.

I leave the house at 7 and often don't get home until 5.  Wow, that was a really busy day, I tell Gil.  Now he's started laughing at me:  You say that every day!

We're still eating dinner together every night.  Gil and I are still reading to the kids before bed.  The homework is getting done, even the "Build-a-Desert-Home" project.  The boys got their birthday parties and I've made it to almost every soccer game.  We still laugh a lot.

Of course, there is a cost.  My meals aren't as diverse as they used to be.  I gave up making kefir every day (no one really liked it anyway).  The house is more cluttered.  I don't have nearly the same amount of time to read or to write.  I scan headlines instead of poring over news articles.  My mind is instead filled with how to write an IEP and whether everyone knows the lock-down procedures and how we can get all the kids to learn their math facts.  And the most significant change?  We haven't had anyone over for dinner in months.  It used to be almost weekly.

I miss those things.  Sometimes, I miss them a lot.  I love cooking and hosting and writing and those things are all shoved to the side right now.

The reality is, I can't do everything.  And I am struggling with that balance.  Last year, when I was at home with Johnny and doing plenty of writing and baking, I was also extremely restless.  I know that restlessness alone does not necessitate a change--there were many years when I was restless at home with small children--but I knew the time wasn't right, so I fought for contentment.  But with this job opportunity, everything lined up.

And I love my job.  It's challenging but stimulating and I love how it's stretching me.  It's significant and meaningful and God-exalting, and Gil and I felt strongly--and we still do--that this was the right time for it.

So now I ask myself:  Are my children emotionally and physically healthy?  Are we nurturing them spiritually?  Are we a tight-knit family that enjoys being together?  Is my relationship with my husband strong?  Is my husband okay with how I'm spending my time?  Am I glorifying God with my time and my gifts?

As long as those things are okay, then I need to be okay with letting other things go.  We're still adjusting--and I sure hope that as I continue to learn this new job, I won't be quite so busy, but even then, I'm just really thankful.  It's pretty amazing being a working mom.

Posted by Amy Medina at 6:15 PM No comments:

Email ThisBlogThis!Share to TwitterShare to FacebookShare to Pinterest
Labels: Life as Principal

I Get To Be Principal 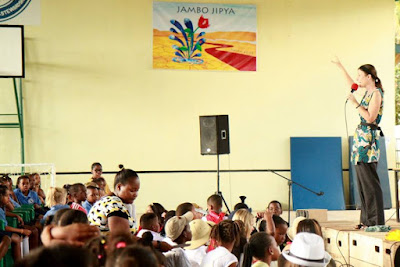 I love this job.  It's a big job and I keep discovering new things that I need to learn and explore and talk about.  I love that.  But I pray a lot because I often don't know what to do.  Like when there's a deluge of rain and parents send you pictures of the road (or what used to be the road) where half of your buses travel home and the director of the school is out of town so you can't make him figure out what to do. 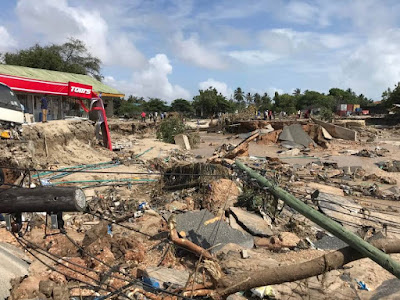 And of course, there's the kids who are hurting and act out and the upset parents and the teacher who had three family members die in one month.  And four of my six class teachers are new to either HOPAC or their grade level, so we're all struggling together to keep our heads above water.

But oh, there is so much joy.  There is joy in struggling together.  There's the light in the new teacher's eyes when she sees her kids' progress from then till now.  The discoveries in the storeroom:  Oh, we do have that math manipulative and that resource DVD!   The exhilaration of a problem solved.  Toothless kindergarteners.  Colorful artwork on bulletin boards.  Exuberantly singing children.  And truly, the most creative, faithful, persevering teachers in the world.

And of course, anyone who has worked with elementary school students knows about the amusing conversations.  Here's some good ones:


Kindergarten child:  My mom doesn't toot very often.  But she does some of the time.
Me: [suppressed laugh] Yeah, everybody does sometimes.


Fourth grade girl [with much enthusiasm]: Mrs. Medina, can you make an explosion?
Me:  Why?
Girl:  Because I love explosions!
Me:  And you want me to do it?
Girl:  Yes, so that you will get in trouble and I won't.

And one of the best advantages of being the principal of your kids' school?  They can't pull any fast ones on you.

For example, you always win Mom versus Teacher arguments:

Here's some of the joy in pictures.  (All pictures below taken by Rebecca Laarman) 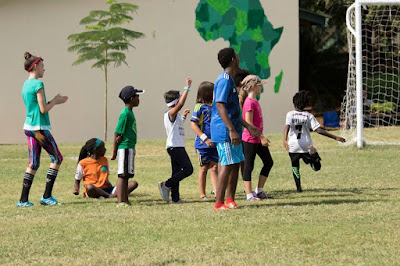 Posted by Amy Medina at 5:53 PM No comments: