I recently did my annual "phone number purge," deleting all the contacts of the people who have just left Tanzania. I counted--only 12 this time. Not too bad. Some years it's a lot more than that.

Every June, friends leave forever. The number of our friends around the world has become too numerous to count, all of them people who have shared home with us in Tanzania for a while. But we've out-stayed most of them, so we are pretty used to saying goodbye. 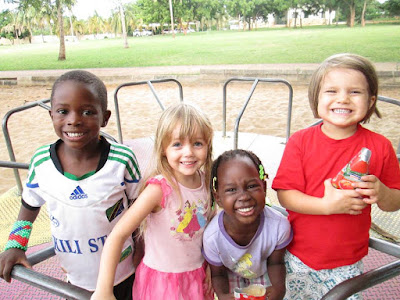 For example, we said goodbye to both of these girls and their families this month. For years, I would come to HOPAC after school to pick up Grace, and inevitably, my pre-schoolers would end up playing with these kiddos while I chatted to their moms. That was five years ago.

As it goes every year, we said goodbye to some wonderful people this month. But there's one in particular who shares a really special part in Johnny's story. 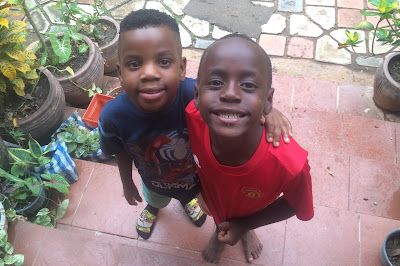 Danny and Johnny lived at Forever Angels together for most of their toddler years. Since they are very close in age, they were part of the same peer group. Danny's adoptive parents are our friends, and they were working hard to bring him home during the same time we were working to bring home Johnny.

Danny came home about three months before Johnny did, and Danny's mom and I wondered if they would remember each other.

About a week after Johnny came home, we ran into Danny and his parents at HOPAC. His mom and I gently pushed our 3-year-old boys near each other. Look, Johnny, it's Danny, from the Baby Home! Look, Danny, it's Johnny!

They just stared at each other solemnly.

As we walked away, Johnny looked up at me quizzically. "Danny went on the airplane," he said.

And I marveled at my boy. He did remember Danny! Kids at Forever Angels are very aware of when their peers leave, often on an airplane. As far as Johnny was concerned, Danny had gone away on an airplane and disappeared forever. So his confused little brain couldn't figure out why Danny was now in front of him.

Danny's mom later told me that as soon as they walked away, Danny couldn't stop talking about Johnny either. The next time they saw each other, it was as if they had never been apart. They've been best buds ever since, and loved being in kindergarten together this year.

There were lots of tears when they said goodbye. There should be a word for kids who grow up in an orphanage together. Not quite a brother, but something stronger than a friend.

Email ThisBlogThis!Share to TwitterShare to FacebookShare to Pinterest
Labels: Adoption