Surprise! We Need to Learn from Christians from Other Cultures 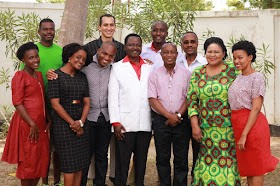 For example, in March, Gil taught a class on developing a biblical worldview.  This was for his second-year students, so they already had a solid knowledge of Scripture, and Gil had a good relationship with them by that point.

Something came up about tattoos, which was met by a strong negative response by the entire class.  Gil was intrigued by this, so he posed the question, "Which would bother you more, if your pastor got a tattoo, or if your pastor committed adultery?"

Unanimously, the class agreed that a tattoo would be much more disturbing to them than adultery.

Of course, this led to a very lively conversation with a lot of Bible pages flipping around, and Gil offering them some pretty strong challenges.  Our American mission leader was visiting that day, and when he told the class that his two adult (Christian) children both had tattoos, the students were dumbfounded.  Gil and our American leader were dumbfounded that they were dumbfounded.  Some of the students were so agitated that they went home that night and spent hours searching their Bibles for proof that a tattoo was the Cardinal Sin.  Which, they sheepishly admitted, they didn't ever find.

And that's just one example of a day in the life of Reach Tanzania Bible School.  This kind of discussion happens all the time.

It might be tempting for us American missionaries to believe that we are in Tanzania to set straight the African Christians who don't know any better.  After all, we have theology degrees and conferences on doctrinal statements and We Know The Bible.

What we've learned, though, is that they need to set us straight too.  We white Americans have a thing or two that we can learn from the African Church.

When we talk about church in America with our Tanzanian friends, it's their turn to be shocked.  Your church services are only an hour and fifteen minutes long?  And that's the only service you attend all week?  And you've never, ever done an all-night prayer vigil?  Like, never?  Are there even any Christians in America?

Of course, you might protest that measuring godliness sounds like legalism.  Which is true--but we still do it, don't we?  If you are American, what would you say to a Christian who never did personal devotions, but spent many hours every week in church worship services?  Would you even know where to put that person in your spiritual hierarchy?  And would you be able to back up your conclusion with Scripture?

It's easy for us, as foreigners, to come to Tanzania and point out what they are doing wrong.  Those deficiencies pop up to us broadly and clearly.  But I wonder, what if a Tanzanian Christian came to the States and was given a voice in the white American Church?  What deficiencies would be glaringly obvious to him?

To start with, they might wonder why we get so excited and passionate while watching sports, but when in our worship services, look bored out of our minds.  Maybe they would point out the reluctance of America Christians to open their homes to others--certainly to strangers, but even extended family members.  How about our lack of being unconditionally generous with our resources?  Maybe our gluttony?  The way we waste food?  Or how we consistently serve donuts every week to congregations who are already unhealthy?  Maybe how we downplay the older people in our church and instead do everything we can to attract the young?

Maybe you don't see those things as "big" problems.  Maybe you want to defend our own church culture as not being that bad.  But let me tell you something--those things--like passionate worship and generosity and hospitality and devotion to prayer and respect for elders--the way that the Tanzanian church does those things?  Puts the American church to shame.  The contrast is stark.

But that is dangerous.

God created culture, and he loves ethnicity and diversity, even in (especially in) his Church.  I absolutely believe in the authority, inspiration, and the unchanging nature of Scripture, but we also must remember that it was written for all generations, all cultures, all peoples.  I think sometimes western Christians assume they have the trump-card on what Christian culture should look like....but why?  What if an African (or Asian, or South American) Christian holds to the authority and inerrancy of Scripture, uses solid principles of interpretation...and yet comes to different conclusions and applications?  Is it possible that they could be seeing things that we've missed because of our own culture's influence?

This is why we were created to need each other.  And in a country as diverse as America, I wonder why it is so rare that white Christians grasp that truth.  Don't we realize that we are missing out when we refuse to bring other cultures, other colors, other languages into our church conversations?  Don't we realize that even in that refusal is a major blind spot that we will be held accountable for?

We also have to understand that because white Americans have usually had the upper-hand in American Christianity, that people of other ethnicities and cultures are not going to automatically come to us with their concerns about our church culture.  Their voices have been overlooked for way too long for them to try, or they are just too polite.  It's got to be our initiative, our first step, if we are really going to learn from them.

It might start with something as simple as going to a Christian friend from another race or culture and asking, Where are the blind spots in white American church culture?  How are we sinning--against you, against God, against our neighbor--and just ignoring it?

And then swallow our pride and listen.  Listen.  That kind of humility is something that Tanzanian Christians are teaching me.  I hope I can be like them.