When You're Sharing Jesus as an Outsider

Gil and I hadn't been in Tanzania very long before we made our first whopper of a cultural mistake.

We had been investing deeply in the life of an Indian young woman who was with us several times a week. She had a rather harsh mother who, we felt, was giving her daughter unrealistic boundaries and unnecessary expectations. Wanting to help our friend, we approached her mother with our advice. "It's not okay how you are treating your daughter," we said firmly. "She is eighteen years old, so she is an adult. She can make her own decisions."

And the mother responded humbly to our 25-year-old, American wisdom and graciously thanked us for enlightening her on how to parent her child. And we all lived happily ever after. The end.

Um, no. We alienated the mother, caused a deeper divide between her and her daughter, and learned a very hard lesson: Culture and worldview matter. In Indian culture, it is unthinkable to consider an 18-year-old unmarried girl to be either an adult or independent from her parents' authority, no matter how harsh their expectations might be.

And so began our journey into learning how much we did not know about trying to share the love of Jesus in another culture.

Since America's inception, Christians didn't need to worry about this. Cross-cultural missions was out there--not right here. Okay, so maybe they thought about it when it came to first-generation immigrants. Maybe a church would offer a seminar on "How to Reach Your Muslim Neighbor."

I'm not saying that American churches weren't concerned about evangelism; my point is that evangelism of middle-class America was not seen as cross-cultural. Sure, there were plenty of non-Christians out there, but we could assume that they shared many of our core beliefs. We had a starting point of agreement: There's a God, He has established right and wrong, and the Bible holds some degree of authority.

And even once most people started abandoning those beliefs, we all still shared a worldview that came from the Bible, whether we were Christians or not: There is an inherent purpose and order to the universe. We can trust our senses. Biology matters. If you're a human, you're a person. Marriage and family is the bedrock of a society. Moral standards are absolute, even if we might argue over specifics.

But we can no longer assume agreement about these things. Which means that even if you look the same and speak the same language and are living side by side with your middle class, white American neighbors, if you're a Christian, you are now a cross-cultural missionary. Effective evangelism in America requires that you understand a different worldview.

I'm not saying that it's wrong to keep fighting for change at the government level--after all, since America is a government of "we the people," we have a responsibility to work towards a government that we believe is best for society. But we're not going to change hearts by changing laws.

And if we want to change hearts, we've got to understand them first. One of the first things missionaries are told at orientation is that People have a reason for what they do. On the outside, people's actions might look really stupid or foolish to us, but dig a little deeper, and there's a reason there. Even behind horrendous traditions such as female genital mutilation or child marriage or albino murders, there's always logic there. So if you come into a foreign culture with guns blazing, forcefully proclaiming that these are wrong, terrible things, you will lose your audience immediately. Missionaries have learned this the hard way for centuries.

That doesn't mean that we accept these practices as "cultural" and don't do anything about them. But it does mean that we spend time--a lot of time--trying to understand where these ideas come from, and get deep into what motivates culture. Because real change comes from the worldview level.

As American Christians become outsiders in their own country, I can't help but wonder if they have the same lessons to learn as cross-cultural missionaries. As I watch from a distance, I see lots of Christians getting really afraid or really angry, because they feel like they are losing their country. Maybe they are. But what American Christians need to remember is that the "Christian culture" in their country for the last two hundred years has been an anomaly in world history. It shouldn't be an expectation.

American Christians, you might need to start living like missionaries. And among other things, this means that in order to be effective in evangelism, we've got to start by truly understanding the prevailing worldview in our culture. Instead of just frantically trying to put out the fires of abortion and sexuality and re-defined family, we've got to understand what's motivating these cultural changes. And that's going to require a study of worldview.

Do we know why we believe what we believe?  Christians have often said, "God said it, I believe it, that settles it." 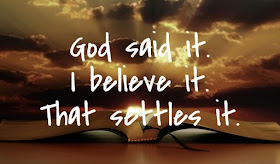 And the clouds parted and the sun rose in glory behind the open Bible, and all God's people said "Amen!"

And everyone else stopped listening.

We should be asking these questions. Can we answer them for ourselves? Can we understand how others would answer them...and why?

Nancy Pearcey is my favorite author, and worldview is her favorite subject. But it shouldn't be reserved for college philosophy courses--this is stuff every Christian needs to know. Every child needs to learn. If we want to be effective evangelists in our culture, then we must understand worldview. Welcome to the world of cross-cultural missions.

Know of some other good resources on this subject? Share them with us!